Home » A view from the Gothenburg Horse Show

A view from the Gothenburg Horse Show

After chancing the same Italian restaurant for the third night in a row, (apparently the steak fell short of previous evening’s standards) we have now arrived at the final day of the Gothenburg Horse Show. The main event today is the Rolex FEI World Cup Final Jumping….

The prize fund for the World Cup is 295,000 euro and today’s final accumulator class also comes with an additional 110,000 euro. There is also a Rolex for the overall champion.

The first round of today’s class has just finished and there was not a single clear round! Olympic Gold Medallist Steve Guerdat of Switzerland came the closest – he had the last one down after a really good start. I was going to cry, but the cameraman for Swedish TV had the thing in my face, so I had to remain composed. Anyway, the results so far have set us up for an immensely tense final round.

Looking back to yesterday’s competition – the Reem Acra FEI World Cup Final Dressage. Amazing displays from every single horse and rider. Dutch champion Adelinde Cornelissen’s new freestyle isn’t quite embedded yet (according to her) and she lost the title to Helen Langehanenberg of Denmark. The charming Edward Gal was third and sitting on top of his relatively new black horse, he did say the feel, as well as the view, reminds him a bit of the great Totilas. Exciting things to come from this pair, I think.

Adelinde seemed ‘OK’ with coming second – I guess after the Olympics she’s had a bit of practice at that. When asked if she’d considered retiring Parzival, any time soon, she seemed shocked and said NO. She’s gone home to have a bit more practice – and with another 45,000 euro in her pocket.

Helen said she’ll be investing in many carrots for Damon Hill and with her 56,000 euro prize money, I’m concerned he might get fat. 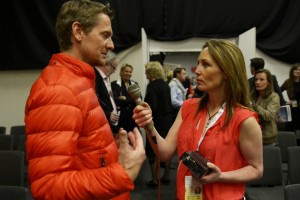