What a glorious place Spruce Meadows is. Facilties for riders = first class. Facilities for spectators = fabulous (it’s a bit disney land like). Weather in Calgary = changeable. Friendliness of the locals = lush.

The riders seem to love the place – there is an incredible feeling of space – not sure you always get that vast uncomplicated inpression at European shows. The size and volume of warm up areas is something I’ve never seen anywhere else. There’s even a rider’s chapel complete with magnificent enormous stained glass window. (Although I don’t reckon anyone ever uses it)…

The food stands are surrounded by delightful little sets of chairs and tables, set up with parasols on block paved circles and walkways with grassy banks in between. On every corner there’s some monumentous sculpture or other, complete with history and dedications.

On Saturday for the Nation’s Cup, it peed down all day. I’ve never neen a main arena so soggy. Show Jumping turned Eventing as the horses sloshed through the marshy mud and looked they were galloing along a beach in the sea. Amazingly no-one really slipped and there weren’t any complaints. Apparently a few years ago, it snowed and they just carried on regardless with 6 inches of the white stuff in the ring! Anyway the class was good – and the Germans won.

Thankfully, by Sunday it dried up and the going for the Grand Prix was much improved. Spruce is famous for their jumps – I’m told they buy one from all the Olympics and the course looked like a work of art in the glorious sunshine. After the first round, there were 8 clears and Ben Maher was second – I thought he might actually win it. But Cella, he said, was tired and she had two down in the second round, leaving him 7th overall. A Belgian rider – Pieter Devos won it…. taking the 1 Million Canadian Dollars first prize! Steve Guerdat of Switzerland was second and took home £124,000. Imagine my surprise to find him sitting behind me in economy class on the flight home.

After a good old fashioned Calgary style Hoedown on the first night followed by the best Beef Wellington I’ve ever had on day two, I left Canada feeling very well entertained, but the hightlight was probably watching the organisers of Geneva show, along with those that run CHIO Aachen and half the Southern family doing dressage ON FOOT on the main drive of the Southern family home…. 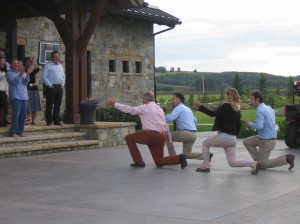