Home » Escape to the Sun

Escape to the Sun

While it seems the UK has been deluged by rain, it was a welcome escape to head to Qatar and sunnier climes for the Commercial Bank Qatar Masters. As I donned my LBP polo shirt I had clearly forgotten what is was like to feel warmth and see that round yellow circle in the sky. Oh joy!

Once again we were providing the official on-site radio station and our studio was located in the public village so we had the prime spot to watch the evening’s entertainment. This year it was Sister Sledge and Texas. That’s the joy of this tournament, aside from watching some of the best golfers in action, there really is something for everyone and it was my role to record some interesting behind the scenes packages. So from the hospitality to merchandising, to the Trick Shot Shows and the odd familiar face such as Dwight Yorke, I, with mic in hand, was the roving reporter!

And what a thrilling play-off to decide the winner with Sergio Garcia eventually claiming the title. Sport at its best and a bit of sunshine to boot – what more could you ask for?

Our studio and waiting for Texas. 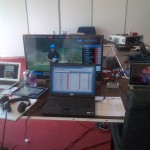 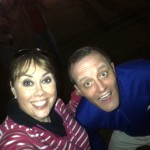