I enjoyed a very eventful and enjoyable debut as an athletics commentator with Lloyd Bell Productions for IAAF Radio at the World Junior Championships in Eugene, Oregon, even if it didn’t start according to plan.
Sam must have wondered what sort of person she had hired as she breezed through US customs only to look back and find that I had completely disappeared. The official who checked my passport had ushered me into a Homeland Security police station where I was grilled as to who I was and what at I was doing in America. Presumably there’s another John Marc Anderson who is a wanted criminal or fugitive from justice as the same thing had happened to me on a visit to New York two years previously. I eventually persuaded them that I was nothing more than a humble sports reporter from London and was allowed to enter the country.
This slightly nervous situation was made more bearable by the fact that the guy sitting next to me was Wayne Coyne, lead singer with the alternative rock band the Flaming Lips of whom I am a fan. He had presumably been pulled in for looking slightly weirder than the average traveller but was a really friendly guy and we had a nice chat as we waited to be interrogated.
Once ensconced in our Eugene HQ, the very 1970s style Valley River Inn, I enjoyed a bonding session with my new colleagues, fellow commentator Jonathan Blackledge and producer extraordinaire Micky Curing over a few of the excellent beers on offer at the bar.
I’m pleased to say that we also gelled very quickly on air and the championships provided some truly memorable moments as the sport’s best youngsters showcased their talents to the world. On Day One I found myself in the unusual situation of having to commentate on a race with only one competitor, as Ecuador’s Angel Tenorio ran against the clock to qualify for the 100m semi finals after her earlier disqualification had been rescinded. She eventually took the silver medal behind Britain’s Dina Asher-Smith who ran superbly throughout and then retweeted me when I congratulated her afterwards.
And the drama kept on coming. In the men’s race local hero Trayvon Bromell was beaten into second place in by team mate Kendal Williams, whose female namesake Kendell Williams triumphed in the 100m hurdles. In the men’s short hurdles Frenchman Wilhelm Belocian produced a sensational performance to smash the world junior record with a sub 13 second run and an emotional Shamier Little took gold in the women’s 400m hurdles two years after the agony of seeing her dreams die as he crashed into the final hurdle at the last championships Barcelona.
The six days flew past almost quickly as the baton in the 4 x 100m relays as IAAF Radio brought commentary, analysis and reaction from every event to its global audience. Sam was her usual unflappable self as she anchored it all and I benefitted hugely from Jonathan’s vast knowledge and insight which can only come from competing at top level. Micky’s finest hour came as he managed to keep us on air despite his laptop virtually melting in the Oregon sunshine on the penultimate day. One of the abiding images of the trip is him crouching in the makeshift bivouac he then constructed to prevent it from suffering a similar fate. It reminded me of David Attenborough peering out at a herd of wildebeest in the Serengeti.
There was one last calamity to be overcome as Sam and I had to climb off a faulty plane in Portland, causing us to miss our connection to London and spend an unscheduled night in Vancouver before eventually arriving home 24 hour late. These obstacles are all part of the unpredictable nature of life on the road but with the right blend of camaraderie, professionalism, talent and teamwork you can give of your best under any circumstance and we certainly did that at Oregon 2014.
It was pleasure to serve. 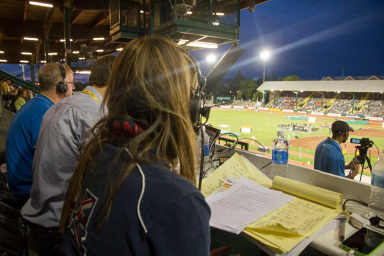 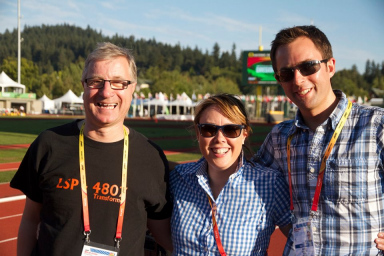 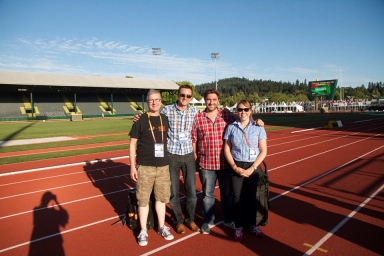