I’m in the Press Room at the end of one of the most epic sporting events in the world – the Alltech FEI World Equestrian Games. It’s every four years, like the Olympics and this time it was in Normandy.

Eight FEI disciplines were contested – Eventing, Show Jumping, Dressage, Para Dressage, Reining, Four in Hand Driving, Endurance and Vaulting. The competition venues were pretty spread out across this stunning region of France with the formidable back drop of Mont St Michel for the Endurance, a world famous Stud hosting the Eventing Dressage and Cross Country phases and with the Show Jumping in the main footy stadium in Caen.

Jobs this week have included the usual interviewing of riders – with a lot of hanging around in the Mixed Zone trying to speak French to the officials. But we’ve also assisted on making a short round up film – an afternoon was spent melting in the Rolex Lodge after the sun came out and the air conditioning unit remained at large. And I’ve just shut myself in a broom cupboard to do a voice over. We thought a broom cupboard might have great acoustics…. Apparently not and it was quickly re done sitting in a car under a coat – which I’m told is quite common.

There were some initial complaints from the media during the first week of the Games, but by the time I arrived on Day 10, they’d sorted out things like catering and now I’m looking at more ham & cheese baguettes than you’ll ever, ever need.

The Netherlands won Team and Individual Gold in the Show Jumping… sadly the Brits were a bit rubbish. Apart from a few drinks with Michael Whitaker in the night when I arrived and a sad long Breakfast on the next table to world number one, Scott Brash, I have not seen one British Show Jumper all week. The commentator eventually gave up on asking the crowds from Great Britain to ‘give us a cheer’. Thank God for Dressage, Para Dressage and Vaulting…. which all managed Gold medals for GB.

The weather for the second half of the Games has been stupendous – warm and sunny – which makes up slightly for the lashing that the 50,000 spectators at the Eventing got. We’ve gone from wellies to sandals in less than a week… but that’s horse sport for you!

For me, it’s home tomorrow for 48 hours then straight to Canada for the Spruce Meadows ‘Masters’ and the next leg of the Rolex Grand Slam of Showjumping. 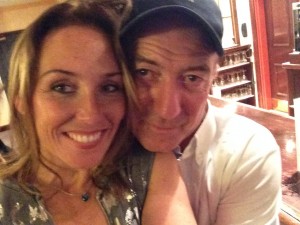 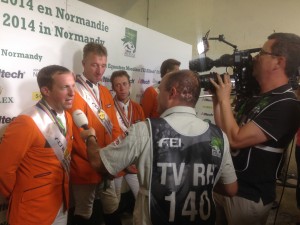