My First Month and Lloyd Bell

For anyone that doesn’t yet know me, my name is Josh and I’m the newest employee here at Lloyd Bell Productions.

This past summer I graduated university and alongside thousands of other graduates in Britain and abroad, faced the daunting task of finding employment.

After a few failed interviews, the annual barrage of negative press began to convince me of their message: I faced the prospect of slipping into a dead-end job with absolutely no relevance to my degree discipline.

Thankfully, just days after I had accepted one of said jobs, Lloyd Bell Productions called and the rest is history.

The first month was amazing. Terrifying, nerve-racking and tough, but exciting and fun too. The first day is now almost entirely a blur, lost in a haze of new experiences and new people.

Of what I can remember, I was terrified. I waited at the end of what seemed like the longest road in the world (half an hour early I might add), keen to begin my new career.

With re-introductions swiftly over with, agendas were set, the company was outlined and away the day went – in a flash. As we left, Laura told me that if I was to arrive early each day then I’d need my own key and quickly passed me one.

My OWN key! A small token for most but it landed hard. This is for real and I need to give it everything.

The days flew by and soon I experience my first day alone in the office, which was a strange one. I had spent the previous two months answering phones for a living but I was terrified of the Lloyd Bell phone ringing nonetheless.

Alongside my administrator role at Lloyd Bell Productions, I have embarked on a training regime with Sam as she attempts to mould me into a professional broadcaster. I face an incredibly steep learning curve and Sam is the ideal task-master for it. Her exceptionally high standards provide the perfect springboard for a rookie like myself to learn his trade.

As the month wore on, I experienced my first “event” as a Lloyd Bell team member when I attended the freezing cold Cheltenham Festival Trials Day.

My role was an observatory one, highlighting to me what a harsh learning curve the next few months will be…although I did prove to be exceptional at coffee duty.

Just like the month, the day ended surprisingly quickly and I was soon navigating my way back to Cardiff alongside some of the day’s more inebriated visitors who flashed their cash (and other things) to anyone who would or wouldn’t listen.

I loved every minute of Cheltenham that day and seriously look forward to the events we have coming up soon. Lloyd Bell took a huge risk on me by hiring a fresh graduate, I look forward to repaying them in kind. 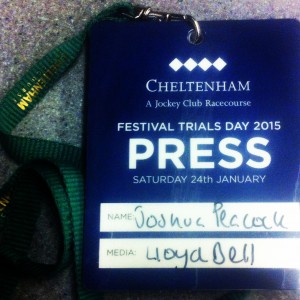