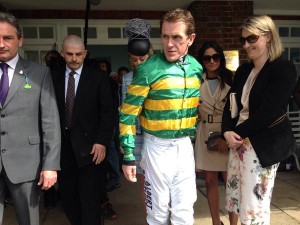 The man widely described as the best jockey of all time and one of Britain’s greatest sports men, AP McCoy, has retired. McCoy finished his season with two third places at Sandown to bring the curtain down on a spectacular career.

McCoy was crowned Champion Jockey for a record 20th time on Saturday as he brought the curtain down on an incredible career. Such was his claim over the Champion Jockey trophy (no other jockey has ever won it since its inception), he will now keep the prize permanently – a token of gratitude from the racing world to its superstar.

Hear AP’s thoughts on an emotional afternoon and the best reaction from those closes to him:

An emotional AP McCoy discusses his final day of racing at Sandown:

AP McCoy talks to Rupert Bell ahead of his final day at Sandown:

Paedar McCoy speaks ahead of his son’s final race at Sandown:

Read Mike Vince’s thoughts on the end of the season and the end of a racing era here.