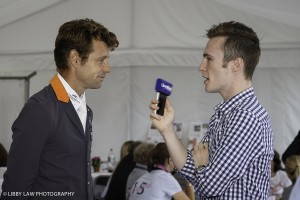 Christopher Burton has made history by becoming only the third Australian ever to win the Open Championship at the Festival of British Eventing.

Consistency prevailed for Burton who was in the mix all weekend amongst a close battle for the lead into Sunday’s Cross Country phase.

Hear Burton’s thoughts on his victory at Gatcombe:

Nicola Wilson came third overall and had two horses in the top ten of the Open Chamionship. As the top performing Brit, Wilson was crowned National Champion and couldn’t have been happier:

Oliver Townend came out victorious in both the Novice and the Intermediate Championships at Gatcombe:

Hear Noah Brook’s thoughts on becoming the first ever winner of the Corinthian Cup at Gatcombe: