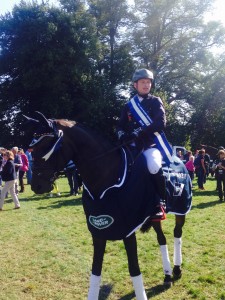 World Number 1 Michael Jung won at the Land Rover Burghley Horse Trials on his first visit to the event. Jung led the competition initially from the dressage phase before falling from his horse on his first cross country attempt. Jung then completed the course on eventual winner La Biosthetique Sam FBW just outside the time, before jumping clear on Sunday’s showjumping finale.

Re-live the dramatic closing moments as Jung jumps clear in front of thousands:

New Zealand’s Tim Price did all he could to challenge Jung, including jumping clear in showjumping. Price’s second place equals his best result at a four-star event.

Christopher Burton completed arguably his most successful ever weekend at four-star level in third and fourth position. Burton was one of just two riders to complete the cross country course within the time despite having never made it around the course at Burghley before. The Australian then twice jumped clear to keep himself in contention.

Christopher Burton after coming third and fourth at Burghley: