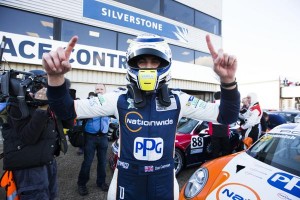 After an utterly dominant season, Dan Cammish has won the Porsche Carrera Cup series at Silverstone with one round of races to spare. The Leeds-based driver entered the race weekend knowing that a fourth would see him lift the crown, but Cammish had won 10 out of 12 previous races this year, including a run of 5 in a row in the lead up to Silverstone.

Cammish eventually finished 2nd in Race 1 but it was enough for him to become Porsche Carrera Cup 2015 Champion.

Hear Dan’s reaction after being crowned Champion at Silverstone:

Dino Zamparelli took his first win of the season at Silverstone after pushing outgoing Champion Josh Webster and incoming Champion Dan Cammish for the whole race.

After the win was originally awarded to Josh Webster, Dino has since been awarded the second race victory at Silverstone due to a time penalty for Webster. Zamparelli is now the highest ranked rookie in the series leading into the last round at Brands Hatch.