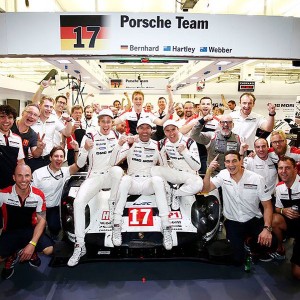 Porsche’s car #17 have won their first FIA World Endurance Championship title at the final round in Bahrain.

Porsche already had the constructor’s title wrapped up before the final round, with Webber and co. taking a slender lead in to the driver’s championship.

Hear from the drivers after their maiden WEC title:

While at the race in Bahrain, Lloyd Bell Productions’ Sam Lloyd also had the chance to catch up with former F1 driver Juan Pablo Montoya as he tested for Porsche.