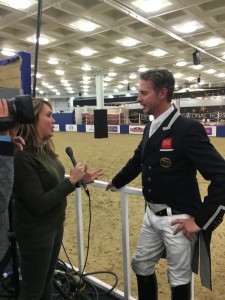 A delighted Carl Hester after his Freestyle win

Olympia is once again underway with the world’s best competing across each category to take home some of the most coveted prizes in the sport.

European, World and Olympic champion Charlotte Dujardin won the Reem Acra FEI World Cup Dressage Grand Prix riding Uthopia. World No.1 Dujardin has risen to the top of the game thanks to her incredible partnership with her horse Valegro, however her score of 77.46 on board Uthopia was enough to see her to victory over trainer and mentor Carl Hester (76.60%).

In a Freestyle test packed with difficult movements, tonight was Hester’s first win at Olympia since his first appearance at the show in 2003.