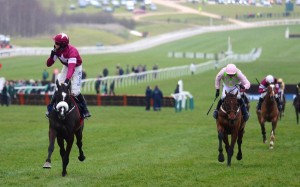 Cheltenham Festival once again delivered an incredible mix of drama and entertainment to thrill over 240,000 racegoers across the week. The week was once again dominated by Irish trainer Willie Mullins and jockey Ruby Walsh as the pair racked up 7 wins together. It was another Irishman however who would claim the main prize as Bryan Cooper rode Don Cossack to victory in the week’s feature race to seal his first Gold Cup win.

As well as broadcasting across the week on 87.7fm and online for Cheltenham Radio, Lloyd Bell Productions provided a global radio service for Racing UK, capturing and distributing all of the action from the biggest event in horse racing. Listen below for reaction across the week:

Ruby Walsh after winning his 50th race at Cheltenham

Jockey Nico de Boinville after his and Sprinter Sacre’s win

Victoria Pendleton after finishing the race at Cheltenham