Home » Being a Badminton Beginner

Being a Badminton Beginner 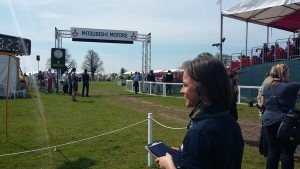 Mistubishi Motors Badminton Horse Trials (admittedly due to ignorance) was a name that I, prior to this year, had no familiarity with. A lack of knowledge around horses, and all things tweed, meant that this year’s event opened my eyes to a whole new world; the world of Badminton Horse Trials. Needless to say my eyes were wide open from the moment I arrived on the third day…

Having driven from Bath early morning, I was greeted by fields of what appeared to be marquees and fairground rides- where was I? As I drove my little KA across the muddy car park, I soon realised this was no small-scale sports festival, this was the real deal. Time to work with the big boys.

I must say at this point, not only was this my first experience of Badminton Horse Trials, but also my first experience of working with the team at Lloyd Bell and Radio Badminton. I was so excited to see what they got up to, how they operated at sporting events, how the experts worked their magic. From entering the media centre, I knew I was in for a learning experience to say the least. After a morning briefing, over a lovely bacon or sausage butty, the team set out with their individual jobs. From reporting, hosting and live interviews, to commentating, editing and working out the logistics, everyone got stuck into their job and consequently produced a fantastic radio program for the event. It was so interesting to see the process from start to finish – watching the interview in the mix-tent, sending it to the editors, and then hearing them play out on radio. Lloyd Bell work a tight ship to produce first-class entertaining radio, and the results show nothing less than just that.

Back to the event… it’s fair to say Badminton isn’t just about the competition; it is much much more. It’s a day (or week) out for people from all walks of life, for different occasions. Spectators ranged from the faithful followers attending their 30th event in a row, to the newbees (like myself) experiencing their first taste of Badminton life, to groups out to enjoy the sunshine and (perhaps more so) the various alcoholic beverages available from the numerous bars.

On touring the Badminton grounds, it’s difficult to absorb everything on one lap. However, after many laps, I soon came to the decision that ‘The Festival of Food’ was my favourite attraction; undeniably due to the countless free samples available! However, a close second were the fabulous jewellery stalls; let’s just say it was a good job I had left my purse back at Lloyd Bell HQ!!

The competition itself was a special year, and by the end of my two days at Badminton, I felt I had witnessed a piece of sporting magic. Not only was it the 25th Anniversary of the Mitsubishi Motors sponsorship, but also Michael Jung stylishly won the Rolex Grand Slam; which I soon learned was the most valuable prize in Eventing – consecutively winning Burghley, Kentucky and the Mitsubishi Motors Badminton Horse Trials!

Although I could see the exhaustion on the faces of those who had worked an intense week, there was still such a buzz at the end of the final day. Michael Jung was a special rider, a true pro. A piece of sporting history had been made, and no matter who you were, you couldn’t help but feel elation for the sport, the rider and all those involved.

On reflection of my first experience of Badminton Horse Trials, I would say it’s an event that has definitely earned its reputation as one of the most prestigious events in the equestrian sporting calendar. Although I only attended two out of the four days, I was still able to absorb the Badminton ambiance and it sheer significance in sport. Three words to sum up my week end: enlightening, entertaining and TWEED-ilicious!