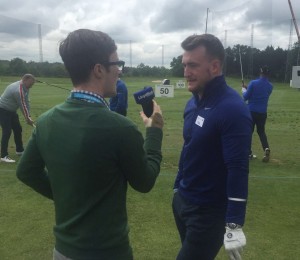 My time at the BMW PGA Championships, while short, was enthralling and thoroughly enjoyed.

After navigating through the often tricky corridor of the M4 past Reading and through to London, I approached Wentworth and marvelled at the wealth and style of the course and surrounding areas.

Whilst the Pro-Am tournament was just the appetiser before the main event, the fans still flocked into the course to catch a glimpse of their favourite golfers in a relaxed attitude and maybe, just maybe grab a selfie with Niall from One Direction.

The Pro-Am day at BMW PGA offers a window to fans and media alike that few other competitions can offer – a closeness to celebrities and a relaxed atmosphere that opens a dialogue between golfing fans and enthusiasts to the rest of the world.

I will certainly be the first to admit that I am no expert in assessing the greens of a world class course. However, it would have taken a heart of stone not to have been impressed and warmed by Danny Willett’s triumph at the Masters and he was undoubtedly the big golfing draw to Wentworth.

With football as one of my main passions, it was difficult not to shove a microphone in the face of everyone I had ever seen on Match Of The Day and some definitely saw me coming shortly after I chatted with Gianfranco Zola…and probably ran!

Next I spoke to two men at the top of their respective games with Scotland full-back Stuart Hogg (arguably the most in-form player in European rugby right now) admitting that he was “bricking it” at the idea of taking on 18 holes. We had to re-record his first answer.

Sam Lowes was the final victim of the day and while many were unaware of his rising stock in MotoGP, I relished the chance to chat with him after his terrific, championship leading season to-date. Sam was even kind enough to retweet our interview – a moment in which I would never expect to blush until it happened.

My time at one of Britain’s most iconic golf courses may have done little to lower my handicap from triple figures but it was a thrilling new experience that I would love to get the chance to experience again.