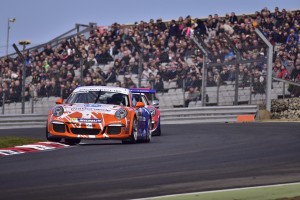 Reigning Champion Dan Cammish has secured two wins at Oulton Park in the Porsche Carrera Cup to make it five wins from six so far this season.

Cammish qualified on pole in both races but won race one in fortunate circumstances after losing the lead to Stephen Jelley, before a racing incident saw Jelley lose his grip on first position and eventually finish second. Porsche Scholar Charlie Eastwood made it a third successive podium by finishing in third position.

Race two saw Cammish dominate from start to finish and win the race comfortably ahead of Jelley who was again in second. Title challenger Dino Zamparelli recovered from a poor qualifying position of sixth to finish in third and keep his championship hopes alive.

Dino Zamparelli reflects on a podium in race two