GB’s Georgie Twigg swaps sports and looks ahead to Rio 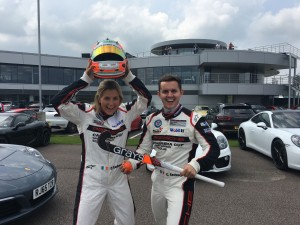 Olympic Hockey Player Georgie Twigg changed sports for 1 day only and tested herself on the track in a Porsche at the Silverstone Experience Centre.

Georgie, who is in the current GB women’s hockey team, looks ahead to the current Champions trophy competition being played and  casts her eye forward onto Rio 2016.