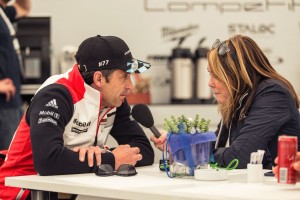 I feel very privileged that I cover some amazing sporting events around the world but being a self-confessed petrol head, the iconic Le Mans 24hr race is undoubtedly one of the highlights in the calendar.

And this year there was the opportunity to really immerse myself into the event by staying on site in a rather palatial motor home nicknamed ‘Dynasty!’ with all the home comforts you could wish for. Now this is my type of camping! Hot water, a comfortable bed and a bottle of wine in the fridge to boot! 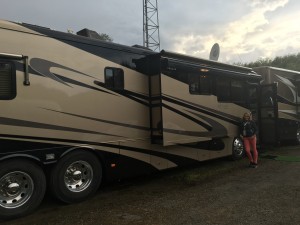 Le Mans represents one leg of the triple crown of motorsport – Indy 500 and the Monaco GP are the other two events but it’s easy to see why – there is something really magical about this place and I have the utmost respect for any driver who completes this unbelievable test of endurance. And there were some familiar faces from other sports too most notably Sir Chris Hoy and Fabien Barthez (wonder what he thinks of the Euros so far!)

The weather definitely played its role with torrential rain in qualifying and then ten minutes from the start as we awaited Hollywood star Brad Pitt’s big moment to wave the 60 cars off, the safety car was out on the track with conditions dismal and visibility difficult. This has always been a ‘glamorous’ event and ahead of the race the track could have been a red carpet affair with Pitt, Patrick Dempsey, Jason Statham, Keanu Reeves and Jackie Chan all having a catch up.

As for the racing, well many thought this could be the closest fought in the history of the event but no-one could have predicted the last 5 minutes with Toyota looking set to claim their first ever Le Mans win but the car lost power and it was Neel Jani in the Porsche who took the lead and the win. In 20 years of covering motorsport I have only once before witnessed such a cruel moment in sport when Carloz Sainz came within 500 metres of claiming the World Rally Championship title in 1998. As Mark Webber said to me afterwards: ‘She’s a cruel, cruel mistress is Le Mans’ 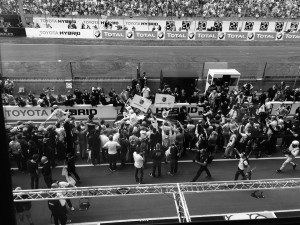 So what a truly phenomenal weekend once again – after the finish it was back to the camp for a good night’s sleep in Dynasty and then homeward bound. But the 2016 Le Mans 24hr race will go down in history for living up to its reputation as the ultimate test of man and machine and an event that I will never ever forget.