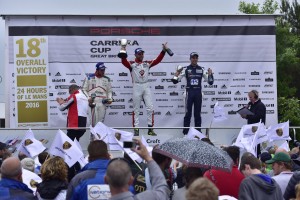 Dino Zamparelli reaffirmed his title challenge with an assured, dominant display of racing at Croft in the Porsche Carrera Cup.

Zamparelli began the race weekend 20 points adrift of reigning champion Dan Cammish in the standings but two wins, two pole positions and two fastest laps for the GT Marques driver has seen that gap slashed to just 4 as the series takes a mid-season break.

Lithuanian Jonas Gelzinis fought hard for his first podium of the season, finishing second in race one ahead of Stephen Jelley.

Despite the changing weather conditions, race two saw Dan Cammish carve through the field from his fifth place qualification to finish second overall ahead of Tom Sharp.

In the Pro-Am1 class, Euan McKay made it four consecutive wins in the series after dominating both races. Peter Kyle-Henney took his first win of the season in Pro-Am2 in race one, with Mark Radcliffe’s win in race two returning him to the top of the class standings.

Pro-Am2 driver Mark Radcliffe after his victory in race 2