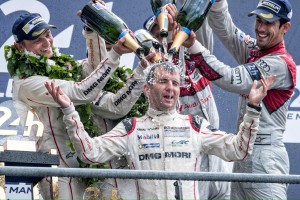 Romain Dumas is soaked in champagne

In one of the most remarkable Le Mans 24 hour races of recent times, Porsche were victorious for the 18th time, extending their own record in the process of being the most successful manufacturer in the history of the race.

Car #2 of Neel Jani, Marc Lieb and Romain Dumas were victorious in remarkable circumstances with rival and the race leading Toyota losing power with just 5 minutes left to drive. The second placed Porsche soon overtook the Toyota and cruised to victory in dramatic fashion.

Porsche’s car #1 suffered technical problems earlier in the race, resulting in a disappointing finish for the reigning WEC champions.

Mark Webber reflects on a disappointing race for car #1

Hollywood star Patrick Dempsey was also at the race in his role as Team Principal of Dempsey Proton Racing. We caught up with Patrick to discuss Le Mans, Porsche and the link between Hollywood and the world’s oldest motor race: