Porsche at Goodwood Festival of Speed 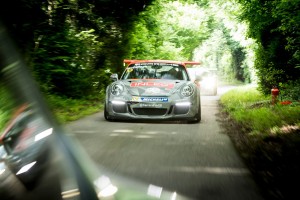 Professional and amateur Porsche drivers at Goodwood Festival of Speed

The Goodwood Festival of Speed took on even greater significance for Porsche with the motoring manufacturer celebrating an emphatic victory at the iconic Le Mans 24hr race, extending their record as the most successful manufacturer in the race’s history.

Reigning WEC Champion Brendon Hartley attended Goodwood just one week after the Le Mans 24 hour race. We caught up with Brendon to reflect on Le Mans, discuss his love of Goodwood and look ahead to the crucial next few weeks in the championship.

Joining Hartley at Goodwood were a host of Porsche Carrera Cup Great Britain drivers, including reigning Pro-Am2 Champion John McCullagh and current Pro-Am1 driver Euan McKay. We caught up with both drivers reflect on the Carrera Cup season now that we have reached the half way point and what it means to be at Goodwood as a racing driver.