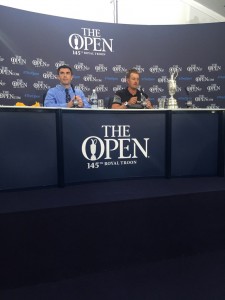 Henrik Stenson faces the media after his win

Henrik Stenson has become the first Swede to win The Open after his incredible victory at Royal Troon. On a remarkable day that will go down in golfing history, Stenson carded a final round 63 to finish on a record-breaking score of -20.

Phil Mickelson’s incredible opening round at The Open had led to many assuming he was a shoe-in to take home the Claret Jug, however Stenson had other ideas. Mickelson finished on -17 on Sunday after an epic duel with the Swede with JB Holmes was 11 shots behind Mickelson in third place.

Rupert Bell rounds up The Open

Also at The Open were Britain’s two selected golfers for the upcoming Rio 2016 Olympic games. Justin Rose and Danny Willett will be competing against the world’s best for the first time at an Olympic games.

Justin Rose on being selected for the Olympics