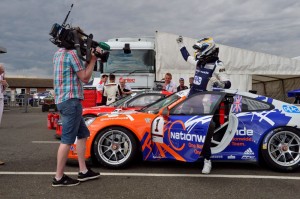 Reigning champion Dan Cammish has reasserted his dominance in the Porsche Carrera Cup after a near perfect weekend at Snetterton that saw him win both races.

After qualifying on double pole position, the Redline driver was made to work hard for the win in race one of the weekend after teammate Charlie Eastwood pushed him all the way. Race two was much more of a formality with Eastwood within touching distance but never mounting a serious challenge.

Two poles, two wins and one fastest lap saw Cammish extend his lead at the top of the championship standings after a difficult weekend for title rival Dino Zamparelli:

Dan Cammish after a great weekend at Snetterton:

Charlie Eastwood after his best Carrera Cup weekend so far:

The Pro-Am1 series has been dominated by Euan McKay so far this season and he continued his rich vein of form in race one with his sixth win of the season and fifth in a row. Race two saw another McKay win but this time it was Euan’s teammate and brother Dan McKay who would claim his first Pro-Am1 race win of the year with a daring last lap overtaking manoeuvre.

Dan McKay after his first win of the season:

Peter Kyle-Henney took his second Pro-Am2 win of the season in race one after an eventful race, while Tautvydas Barstys claimed race two after finally driving what he called “a race without mistakes”.

Cammish’s two wins at Snetterton made it 100 total victories for his team Redline in the Porsche Carrera Cup and we caught up with team manager Simon Leonard to discuss the fantastic achievement: