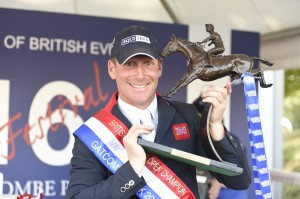 Oliver Townend produced a masterful display of eventing as he dominated across the classes at the Festival of British Eventing. Townend won the CIC*** British Open Championships on board Cilnabradden Evo, as well as winning the Advanced competition and coming second in the Intermediate.

A score of 49.5 was enough to see the Shropshire rider become the National Champion at Gatcombe, with France’s Thomas Carlile coming in second and Ireland’s Elizabeth Power in third.

Townend finished with three horses in the top five of the Advanced class, eventually winning on board Dunbeau with a score of 37.7.

Alexander Whewall was the winner of the Intermediate Championships on board Chakiris Star with a score of 37.7. Oliver Townend finished second with Emily King third.

Francis Whittington was the first champion crowned at Gatcombe after his win in the Novice Championships on board Evento. Selina Milnes finished second and Arthur Duffort finished third.

1 thought on “Townend triumphs at Gatcombe”