Being involved with LBP means I get to experience sport in a way that’s different to anything I’ve experienced before. Being a sports fanatic, I’d like to think I’ve seen my fair share of sporting spectacles; whether it be watching an FA Cup Final at Wembley, watching the infamous Boat Race at home on the sofa, or playing in the UEFA Champions League in Bosnia. However, amongst the abundance of spectating and playing, you will fail to find any experience in the production of sports media.

So when I embarked on my first ‘away job’ to Bisham Abbey, home of Great Britain’s Hockey training programme, needless to say I had no idea to what to expect. Team  LBP left Cardiff early doors, and enjoyed an easy journey to the venue, allowing us to arrive with ample time to set up and begin our work.

I must say, the facilities at Bisham Abbey are fantastic – tennis courts, astro-turf pitches, a gym, to name a few, all top quality! The astro was where we headed, as the GB Women’s Hockey team were well into their morning training session. Cameraman Phil began setting up his kit, whilst I stood on hand, offering any help when required, or attempting not to get in the way! 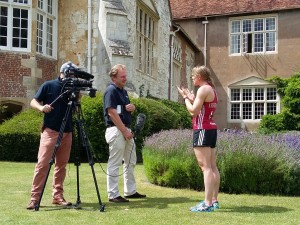 I felt slightly privileged to watch these girls, at the top of their game, train at an intensity not for the faint hearted. Their skill level was purely admirable, however more noticeably for me, was their sheer athleticism. Being a keen ‘gym-goer’ myself, I was in awe of these girls, finely tuned athletes, whose fitness levels manifested in the way they conducted themselves in training. Every single player embodied a lifestyle of continuous physical graft that contributed to their reaching the highest level of their game – An inspiration to an ordinary girl from Cardiff like me.

Back to the job, we began by filming the girls in action, targeting different players in order to collect footage for their individual GVs. I worked with Phil to ensure enough footage of each player was obtained in order to produce a short clip for their local TV stations. We also took footage of the team in action for TV stations to use, it was great to see how the team approached filming and the ways of taking advantage of different effects like slow-mo.

As training came to a close, we were given the opportunity to speak to the players and gather their thoughts and feelings on the fast approaching Rio Olympics. Our reporters Rupert and Josh spoke to the players, whilst Phil filmed, ensuring he caught the best shot. It was lovely to see how the girls were so enthusiastic to speak to us, and discuss all things Rio. I really felt the Rio bug, there was such a positive vibe of anticipation amongst the team; they were all just desperate to get on the plane. 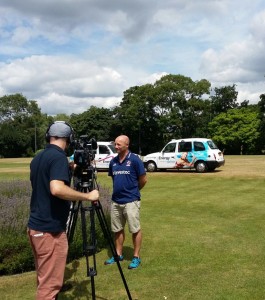 A few hours and a lot of questions later, we had collated enough content to produce numerous short clips about each GB player. The footage would then be edited before sending out to the relevant TV and radio stations for each player.

Another smooth journey, with a stop for some tasty service station grub, and we were back to camp LBP Cardiff in no time. A thoroughly enjoyable day for me, and another learning experience ticked off the list. It was great to see a project of LBP from start to finish, with some brilliant final pieces that I’m sure were very much appreciated by the local media leading up to Rio! Now let’s hope our girls pull it off, and bring something special home! Good luck Team GB!!