Home » Back to Gatcombe in the Sunshine

Back to Gatcombe in the Sunshine

This year was my second at Gatcombe Park, for the Festival of British Eventing, reporting for Lloyd Bell Productions. I enjoyed my last visit, although the weather was very much that of the typical British summertime – cold and rainy . However this year, much to my delights, the sun most certainly had his hat on, I was ready for the exciting day of events ahead. 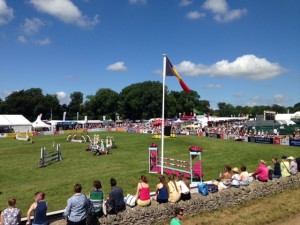 A Beautiful Day at Gatcombe

So once I’d arrived, applied the trusty Factor 30 sun cream and checked out the order of  play, I headed over to the dressage area ready to interview the riders post-event. This year was a little different to my previous experience as it’s an Event Rider Masters event. I was pleasantly surprised by the sounds of music during the dressage tests. If spectators weren’t fully engaged in previous tests, the anticipation for the riders’ choice of song was enough to ensure they were during the dressage. I thought it was really cool to see how the music can add to the unique ambience of the home of the Princess Royal and its prestigious eventing festival.

My favourite choice of music was that of Zara Phillips who opted for Taylor Swift’s pop hit Shake It Off. When I spoke to Zara, I couldn’t resist asking what inspired her to use the song for the dressage test. She responded with “actually I thought I might just have fun tunes so that it might distract everyone from watching my dressage!”

Chatting to Zara and MIa

After chatting with the riders post-event, I enjoyed an afternoon of milling and chatting with the trade stands, and spectators. As with most Equestrian events, there is more to Gatcombe than horses and competitions… the endless amount of shopping stands; from horse necessities, to jewellery, to fine wines, are enough to attract anyone. It was safe to say the stands served their purpose as shoppers looked suitably fed and watered, with shopping bags galore!

In a rare break, I was lucky enough to catch The Devil’s Horsemen Cossack Display Team in their special appearance for the festival. It has been nine years since the stars of ‘Game of Thrones’ thrilled the Gatcombe crowds with their shockingly impressive skills on horseback and they certainly came back in force! They were hanging upside down, standing on the horses and performing all sorts of other crazy feats of agility for the crowd, who were all as stunned as I was! I couldn’t believe how fearless they were; their routines literally had people watching with hands over their eyes!

But back to the job in hand, I ended the day talking to the eventual winner Oliver Townend, who took competing with five horses completely in his stride. Townend is the first Brit in five years to win The British Open Championship and is becoming one of Gatcombe’s most successful riders. He now has the 2013 National title, three Intermediate and four Novice titles to his name. It was a pleasure to witness a true pro excel in his sport – a title very well deserved.
So that was another job done at LBP, and another job thoroughly enjoyed. It’s always fun working for the team, I’m looking forward to my next call!