Home » Cammish the King at Knockhill

Cammish the King at Knockhill 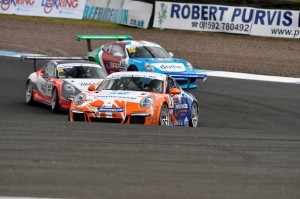 Reigning Champion Dan Cammish edged closer to a second Porsche Carrera Cup title with another imperious display at Knockhill. In the series’ only trip to Scotland of the season, Cammish recorded a perfect weekend with two poles, two wins and two fastest laps and has now extended his championship lead to 44 points.

Rookie driver Charlie Eastwood was once again the only man to mount a serious challenge to Cammish at the front end and matched his previous best race weekend of two second place finishes. Tom Sharp completed his best weekend of the season so far with two podiums, including a thrilling battle in race two with Tom Oliphant.

Euan McKay is another driver with one hand on his prospective title after a fantastic two win display in front of a home crowd in the Pro-Am1 category. McKay’s teammate and brother Daniel finished second in both races.

The next race weekend takes place at Silverstone on the 17th & 18th of September.