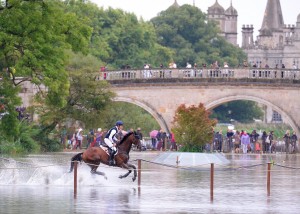 Burton began his competition late on Friday afternoon but his remarkable dressage score of 30.2 had put him on track for a record breaking weekend if the weather had held. No rider completed Cross Country without penalties after torrential weather conditions, with just the Australian and Jonelle Price within 10 seconds of the time.

On a score of 33.4 and with five fences in hand over Andrew Nicholson before he headed into the arena, Burton was still on course for the lowest four star score in British eventing history had he jumped clear in the showjumping finale. Despite eventually knocking down four fences, Burton won the competition with a score of 49.4 on board Nobilis 18:

Competing at his first Burghley since a potentially career ending neck injury, five time winner Andrew Nicholson was delighted to finish second overall on board Nereo: