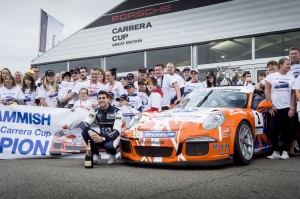 Four titles were up for grabs at Silverstone and all four were won in emphatic style. Dan Cammish sealed his second title in as many years in the series after two dominant victories, taking him to 11 wins from 14 races this season:

Porsche Scholar Charlie Eastwood fought back from a disastrous qualifying to finish third in race one, the podium proved to be more than enough for the Northern Irishman to claim the Rookie Championship and it’s £50,000 prize money:

Needing just one point over his closest rival, Euan McKay won the Pro-Am1 title for the first time after finishing second in his class in race one behind his brother:

After securing a 1-2-3 in the first race, Redline were crowned winners of the Team Championship title. It’s been a record breaking season for the Yorkshire based team and their manager Simon Leonard – having celebrated their 100th win in the series earlier in the year: