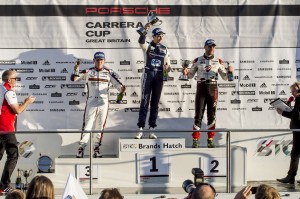 Redline dominate at Brands Hatch with Eastwood and Cammish wins

Dan Cammish crowned his fantastic Porsche Carrera Cup season with a record breaking 12th win in the last race of the year at Brands Hatch. The win broke the previous record for most wins in a Carrera Cup season held by current ITV presenter Tim Harvey – Cammish’s manager.

The back-to-back champion secured the victory in the second race of the weekend after an uncharacteristically poor performance in race one, finishing in 8th – his worst result of the season.

Dan Cammish reflects on a record breaking win and season:

Rookie Champion Charlie Eastwood finally secured his first victory in the series after a string of podium finishes. Eastwood qualified on pole for the first time this year after an eventful qualifying session and was then able to convert his excellent pace into a maiden victory:

After battling with Dan Cammish for the title throughout the year, Dino Zamparelli sealed second place in the championship with an assured pair of podium positions at Brands Hatch despite pace issues: