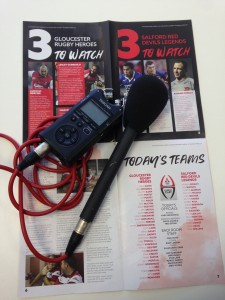 Time and age catches up with all of us and I can’t even imagine the aches and pains a body must feel at the end of a long career in rugby. There were some interesting shapes taking to the field at Kingsholm with a number of players still new to the retirement world and some now enjoying a more relaxed lifestyle.

To be honest, I was amazed at the passion shown by the Gloucester fans for an exhibition game as thousands of fans flocked to the stadium to watch their old heroes. Some club rugby teams struggle to get as many people through the door for competitive matches but not the “Glaws family”.

A game of two halves is a classic sporting cliché but this was a game of two sports and each half was extremely entertaining. The Gloucester team had the fans on their side and dominated the first half (the rugby union half) but Salford were definitely the fitter side and made the Cherry and White heroes pay in the second half (the league half), taking the first Hybrid Cup.

Walking amongst the fans during the game was a brilliant experience and I have finally now experienced “the Shed” – even if Sunday’s match was a more laid back version, like Shed Lite™.

The ex players were amazing with the fans after the game, staying for hours to sign autographs and take selfies before strolling over to us to record for this month’s podcast. Lesley Vainokolo in particular may have flown 11,000 miles just for the game but he certainly got his money’s worth by signing nearly as many Gloucester shirts.

As many of the fans told me, it really was a perfect way to spend a Sunday afternoon.