Blog – A Trip Down Memory Lane… 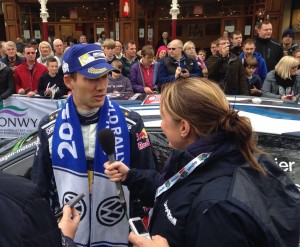 A trip down memory lane…

It’s nearly a decade since I covered the World Rally Championship and I was delighted to get the call from Volkswagen UK to ask our team to cover Wales Rally GB and the British round of the series. As we walked into the service park at Deeside it felt like I had never left as the first person I bumped into was Sven Smeets – ok his role may have changed (he’s now MD of Volkswagen Motorsport) but it brought back memories of my rallying era when he was co-driver to Freddy Loix!

So…ten years on and still there was the feeling of excitement travelling around Wales to catch up with the crews and gauge reaction from the guys as they tackled an event that is notorious for unpredictability with some really challenging conditions and typical Welsh weather! In terms of the VW drivers I had only met Jari-Matti Latvala previously as this was his 15th WRGB but all the crews were fantastic to speak to. Aside from the daily interviews, we put the drivers through the 10 Question Quiz but the highlight had to be putting Andreas Mikkelsen to the test to see how good he was with the Welsh language. He was rather pleased with himself that he knew popty ping (microwave!)

But down to business and as we reached the seaside town of Llandudno for the finish what a result for Sebastien Ogier and Julien Ingrassia – 4 back to back WRGB wins and Volkswagen Motorsport claimed the Manufacturers’ title. Job well done and for me personally, a fantastic 4 days going back to my roots!