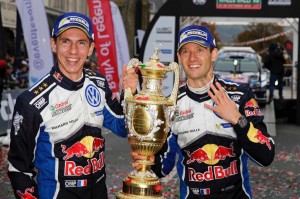 Ogier was recently crowned World Champion, also for a fourth time, and knew that a victory would be enough to secure the Manufacturers Title for his Volkswagen team.

After also experiencing driveshaft issues early in the weekend, Andreas Mikkelsen refocused his attention to secure second place in the Power Stage, recovering vital points for his battle for second in the championship.