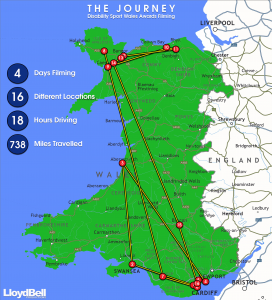 Since starting my role with LBP in May, I have been given a number of opportunities to develop professionally. From my first experience at Badminton Horse Trials to supporting the coordination of the Rio 2016 Homecoming, I have really enjoyed getting stuck into every job that has come my way. However if there is one job that stands out more than any other, it would have to be travelling around Wales filming for the Disability Sport Wales (DSW) Awards.

The awards celebrate the huge success of DSW in 2016; congratulating outstanding athletes both current and emerging, acknowledging the incredible work of coaches and volunteers, and of course surprising one inspirational individual with a Lifetime Achievement Award.

Our job was to film every finalist which meant meeting every finalist, which meant travelling to every finalist not based in Cardiff – cue mammoth journey around Wales for myself, Laura and cameramen Phil and Tobi. Day 1 of filming (with Phil) – we began our journey in Cardiff – a nice start as it is our base so little travelling required. A morning of filming in Cardiff was followed by a trip to Swansea for just one stop off at the International Pool. Kit unloaded, makeshift studio set up, interview conducted, makeshift studio set down, kit loaded and an hour later we were back on our travels – next stop Aberystwyth.

An afternoon of travelling through the country side to the West Wales, we arrived at Aberystwyth. Aberystwyth Leisure Centre is a hub for lively activity; especially on a Friday night, so a quiet space was very hard to come by. We found ourselves setting up in a children’s play area, surrounded by ball pits, slides and soft play toys. I think if we were not so drained from our journey Laura, Phil and I may have taken advantage of our space and let out our inner-children… good job we had work to do!

2 hours later filming was complete, it was home time! After a long journey back south, the three of us each went to our humble abodes ready for another day of filming the next day. Day 2 – just a whole day of filming in Cardiff; from St Mellons to Cardiff Bay to Llanishen. Although we had little time between each location I think we all agreed this was our easiest day, the real treck was yet to come…

After a Sunday rest day, we were back on the road on Monday – let Day 3 commence. With a switch of cameraman from Phil to Tobi, once again we began our journey in Cardiff before heading to Bridgend. It was a miracle that after an 8.30am start in Cardiff for our first film, we made it to Bridgend for our next film at 10am. I must note at this point the torrential weather that had meant roads were closed all over Wales, in particular Anglesey where they received the backend of a hurricane. Next stop for us… Anglesey.

Tobi took it upon himself to be designated driver for our journey through Wales. Laura and I learned a lot about Wales on our journey, I’ve never known a man so knowledgeable about our country! When we arrived in Anglesey the weather was as expected… extremely wet, extremely windy and extremely cold! As we arrived at our location we noticed police cars surrounding the entrance of the school, we drew closer and it wasn’t long before we saw the huge tree that had collapsed blocking off our point of entry. Complete chaos.

We eventually found the alternative route into the school, got our job done and headed towards Caernarfon for our next location. The three of us had taken a hit from the weather, clothes soaked through, but we had work to do… smiles on faces and we were ready for our next film. Another late finish, but this time we stayed local as we had another day of filming up North tomorrow.

After Caernarfon we headed to a cosy hotel in Abergele which was near to our first filming session the following morning. Our 4th and final day probably brought to us the most unusual locations. First was our hotel itself where we had to squeeze our makeshift studio into our room ready for our first interviewee. But next it was to Bodelwyddan where our location was a… farm. We thought filming in our hotel was strange enough, but then the farm brought us a whole other level of challenge. Perched between two rows of stables, which held 13 horses, it wasn’t exactly a smooth interview to say the least. Having to pause between neighs or a kick against the wooden fence from some grumpy horses, we managed to capture some useful footage – good luck to our editor!

After leaving the horses in their soggy hay-ridden stables, we were back on the road towards Bangor University. A somewhat more pleasurable location for our filming, then to Treborth for an outdoor film on a flooded athletics track and then our final stop up North to Plas Menai. We were glad to be leaving North Wales and heading home to Cardiff… not before a stop off in Brecon first. By the end of the trip we had completely mastered building the make-shift studio and so it was less than an hour later when we had packed up for the final time and on our final leg – home!

4 days, 738 miles, 18 hours of driving and a total of 17 stops later we had completed our journey, captured all footage and were ready to sleep for the next week. I enjoyed every minute of the experience; it was my first time interviewing so the pressure was on, but I loved it. When it comes to talking to people and learning about their experiences, I could chat for Wales and so although very tiresome, this project was my favourite to date… roll on next year!