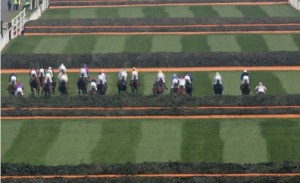 The weights for this year’s Grand National have been unveiled ahead of the race on April 8th.

Ireland’s senior handicapper Noel O’Brien’s gave his reaction to the top five weights in the handicap, headed by Outlander, being given to Irish Trained horses:

Last year’s runner up The Last Samurai is the top rated British trained runner. The Kim Bailey trained horse has been given 11st 05 for the race in which he came so close to giving his trainer a 2nd win:

2007 winner Gordon Elliott has already confirmed that Outlander won’t be among the 40 starters for the world’s most famous steeplechase, despite the horse being given top weight:

Trainer David Pipe’s reaction to the news Vieux Lion Rouge, the gutsy winner of the Betfred Becher Chase is weighted number 40 which guarantees him a run:

Jimmy Moffat, who was denied a run for his stable star Highland Lodge last year when he missed the cut is delighted with weight 42 and almost certain starting place:

Jonjo O’Neill has two of the top 11 horses in the handicap- here are his thoughts on Minella Rocco and More of That: