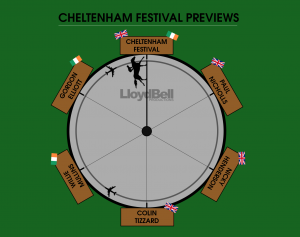 As the racing world approaches arguably its biggest event of the year, the UK & Ireland’s top trainers open their gates to the world to talk Cheltenham Festival hopes.

Champion Trainer Paul Nicholls is hoping a string team of Novices will spearhead his attack on yet more Cheltenham Festival glory next month.

He’s saddled 40 Festival winners, the third highest tally ever and will head to Prestbury Park next month with a few established stars and some great hopes amongst his younger horses.

Trainer Nicky Henderson has issued an upbeat bulletin on his leading hopes for the Cheltenham Festival, now less than three weeks away.

Arkle Trophy favourite Altior heads the Henderson squad and the most successful trainer ever at The Festival has also confirmed he’ll have three runners in the Stan James Champion Hurdle on the opening day.

Trainer Colin Tizzard will take his strongest ever team of horses to the Cheltenham Festival next month, even though he’ll be without the injured Thistlecrack.

Native River and Cue Card remain bang on course for the Gold Cup in three weeks, while Tizzard is still finalising his team for the Novice races.

Tizzard’s son Joe gave up a riding career to become assistant to his father, and in an extended interview he’s been speaking with Mike Vince about the family’s Festival dreams, and how his father is coping with a star filled stable preparing for their dates with destiny.

Willie Mullins has confirmed he expects to saddle more than 40 horses at the Cheltenham Festival next month, despite the absence of a number of his stable stars.

Faugheen, Annie Power and Min lead the stay at homes but Mullins team will be headed by the all conquering Douvan, who bids to give Ireland’s Champion Trainer his first win in the Betway Queen Mother Champion Chase.

Ireland’s Champion Amateur Patrick Mullins is set for some mouthwatering rides at next months Cheltenham Festival.

The 27 year old is also Assistant to his father, and has given a strong hint that if all goes well he’ll ride Carter McKay in the Champion Bumper, a race in which he and his father have enjoyed enormous success.

The meaning leading the race to be Ireland’s Champion Trainer this season is set to field his biggest ever team at next months Cheltenham Festival.

Gordon Elliott, who has enjoyed a vintage winter hopes to improve on his best ever tally of 3 winners last year with a strong squad headed by Gold Cup hope Outlander and Tombstone, who looks likely to be supplemented for the Champion Hurdle in a fortnight.

12 months after a famous Cheltenham Gold Cup triumph on Don Cossack, jockey Bryan Cooper is keeping his fingers crossed for the 2017 Cheltenham Festival after an injury plagued season.

Cooper, from County Kerry is retained by Michael O’Leary’s Gigginstown House stud and having just returned from yet another lengthy injury setback can look forward to some mouthwatering rides.