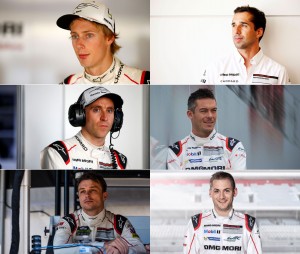 After securing back to back championships in 2015 and 2016, Porsche are aiming for a hat-trick of World Endurance Championships titles in the upcoming season. With a host of changes across the two LMP1 teams, we caught up with the drivers to talk 2017:

Andre Lotterer makes the switch from Audi to Porsche, forming to join car #1:

After winning Le Mans for Porsche in 2015 alongside fellow newcomer Earl Bamber, Tandy will this season join the LMP1 team as a permanent driver:

Reigning Champion Neel Jani is all that remains of car #1’s 2016 title winning trio but he’s looking forward to a new season with new teammates:

A winner at Le Mans in 2015 alongside Tandy and F1’s Nico Hulkenberg, Bamber is keen to prove himself a worthy replacement for Mark Webber:

Former Champion Brendon Hartley is excited by the prospect of driving alongside long-time teammate Bernhard and long-time friend Bamber: