Home » All over for another year… Cheltenham

All over for another year… Cheltenham 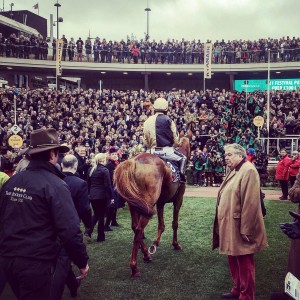 All over for another year… Cheltenham

So it’s over for another year. The Irish did a veni vidi vici on us poor (I don’t bet but my fellow country folk all cry with one accord as they yes after betting disaster after betting disaster) Brits and then to add insult one senior Irish Jockey texted me on Saturday night ‘Delays leaving the Aviva. Gardai are dealing with a broken down Chariot. It’s lost at least one wheel.’

That’s what I love about Cheltenham- it is just about the only  sporting event on earth where you can lose a fortune and still emerge smiling and deep in conversation with the bloke next door who you might not have met until that bus queue back to town.

Even the great Chief Executive of Horse Racing Ireland took time out from unmercifully taking the mickey out of his (former) British friends to tweet the picture of the week- of the first winner of the week, Labait, who has spent more time in the Naughty Corner than my producers have had hot dinners for refusing to start, tailed off in the distance after one of his umpteen shows of ‘down toolserie’ at, of all places the beach course at Laytown!

So many memories- Ruby Walsh’s quite brilliant four timer when the chips were down after two X certificate days for Team Mullins on Thursday, and for me, the sheer delight in watching two of the most decent people in racing, Jessica Harrington and Robbie Power hit the jackpot with Sizing John in the Gold Cup.

One personal sadness is that there was no sign of someone who has become a good friend from County Wexford who told me a year ago he always travelled and threw a compassionate leave claim for the funeral of his grandmother. Unfortunately last year his boss was there as a guest of one of the sponsors and they…er… met. He pointed out this was the fourth grandmother he had buried in five years…all in the same week.

May be he’ll be at Aintree. I will. I cannot wait. It’s less than 3 weeks and then the magic of the Punchestown Festival at the end of April to round it off. Oh lucky boy.

Anyone got a certain winner to pay for it?