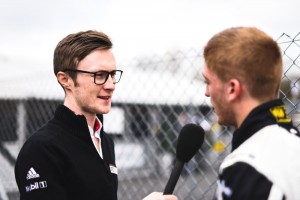 Josh catches up with Lewis Plato after his third place

The records continue to tumble for reigning two-time champion Dan Cammish as he became the fastest driver in Porsche Carrera Cup history to reach 25 wins in the series.

The Redline driver has only been in the series a little over two years but already has a quarter of a century of wins to his name alongside two titles in two season.

Having qualified on double pole position, the man from Leeds was pushed hard in race one by teammate Charlie Eastwood but crossed the line to win the first race of the season:

Having won his first Carrera Cup race at Brands Hatch last season, Porsche Scholar Charlie Eastwood did all he could in race one to challenge the leader but was satisfied with second position.

In qualifying, the top four positions were separated by just 0.1s and Lewis Plato held off immense pressure in the battle for third to claim his first podium in the series.

The second race appeared to prove far more straight forward for Cammish who again led from start to finish but opened up a more sizeable advantage over second place.

Having raced BTCC last season, Alex Martin returned to the Porsche Carrera Cup this season to compete for the Pro-Am1 title and was delighted with his first win at the opening weekend.

After a hard-fought Pro-Am2 win in an eventful race, Shamus Jennings was also awarded Driver of the Weekend.

To hear all the audio from the weekend, head to the Porsche Carrera Cup GB Soundcloud here.