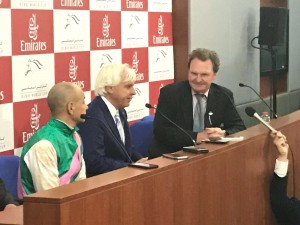 Rain, rain and more rain – you wouldn’t expect a blog about Dubai to start with those words, but unfortunately that was the case for my recent journey to the Middle Eastern City of Luxury.

The Dubai World Cup is always an enjoyable event for me and despite the horrendous weather this year was no different. If anything, the weather made for an even better competition due to the unusual ground having an effect on horses’ performances.

However, the World’s Top Rated Horse Arrogate, like a true pro, did not let the weather affect his performance.  Despite a poor start, the star of the show ran out as two and a quarter length winner of the US $10m Dubai World Cup at Meydan, joining the all-time greats of American racing list. 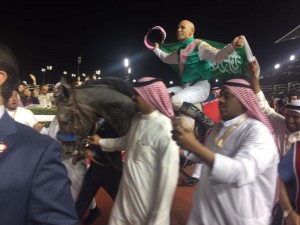 My favourite part of the night was when 32 year-old trainer Chad Summers gave his very own rendition of Country and Western singer Katy Musgrane’s song Mind Your Own Biscuits – but not for lack of reason. He had just landed his first ever winner as a trainer with 4 year old Chestnut ‘Mind Your Biscuits’, named after that very song – A fantastic moment for us to witness.

In true Dubai style, the competition was sealed off with a fantastic firework display but also something I’d never seen before – a drone performance. It really was something quite remarkable, with the different coloured lights creating a spectacle of visuals for spectators to watch in awe.