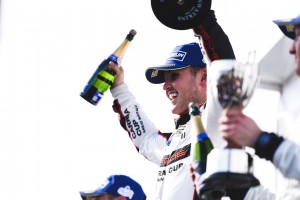 Porsche Scholar Charlie Eastwood was delighted with a perfect weekend as he claimed two wins and the championship lead  for the first time this season.

Disaster struck for double reigning champion Dan Cammish in qualifying, meaning that the winner of rounds 1 & 2 would have to start from 10th and 20th on the grid. From that moment Eastwood knew it was his chance to strike, first claiming a double pole  position and then dominating both races to claim his first two wins of the years:

Remarkably, despite his grid positions for both races Cammish went on to finish 2nd in race one of the weekend and battle from the back of the grid to finish 4th in race two. Even after everything he has achieved in Carrera Cup, he said he has never worked harder:

Alex Martin has seamlessly transitioned back to the series after his time in BTCC, taking two wins from the first four races including winning the second round at Donington:

It was also a perfect weekend for Pro-Am2’s Peter Kyle-Henney as he secured two dominant wins and two pole positions, making up for a disastrous start to the year at Brands Hatch:

For more of the race reaction, head to the Porsche Carrera Cup GB Soundcloud.