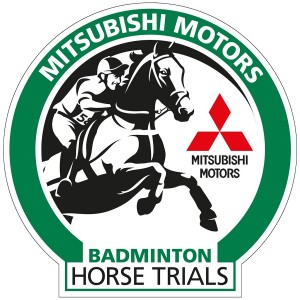 We love working at the Mitsubishi Motors Badminton Horse Trials as it is such a fantastic event. However, what makes it extra special is the fantastic team we have working as part of Radio Badminton.
Our hosts and commentators do a grand job as we all know, however it’s no secret that the listeners also love to hear from our ‘out and about’ reporters, and on-air couple, Beth and Josh (otherwise known as BOSH).

We caught up with the terrific two to hear about their favourite interviews of 2017!

Beth’s top three features of Badminton 2017 consisted firstly of an interview with celebrity chef Rosemary Shrager asking her about her own previous experiences of the Badminton Horse Trials. Only first coming to Badminton three years ago, Rosemary told Beth that she particularly enjoys the atmosphere and the trade stalls, in particular the food. Rosemary also said that she was looking forward to Mary King cooking a pork pie recipe from one of her books. Rosemary also told Beth that she was impressed with all of the riders, and when asked about the perfect Badminton banquet, she said that venison would suit the event well because of the British cultures of the event. Rosemary concluded by pointing out the wide variety of the stalls available at Badminton, with Beth saying that she had just tried a £50,000 ring on. 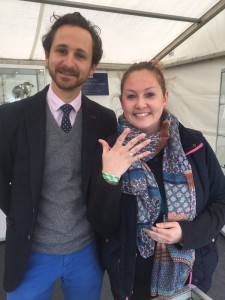 Continuing on the theme of jewellery, Beth then told us that her second favourite feature of Badminton this year was speaking to James, the Manager of Walter Bull and Sons Jeweller, located amongst the vast rows of trade stalls. Walter Bull and Sons are the jewellers that have created the eight trophies for the Badminton Horse Trials. James said that there was a huge raise in popularity of antique jewellery, with a silver ring worth around £50,000 being the most popular item on show with lots taking selfies with it.

Beth also said that her third favourite feature of 2017’s Badminton Horse Trials was speaking to Stevenson and Sons’ rocking horse manufacturers and repairers. Beth’s interview was conducted with a twist with both herself and her interviewee sitting on rocking horses. The Stevenson Brothers have been reviving and restoring rocking horses for 35 years, having started out in a shed on their sister’s farm. Following in the footsteps of their uncle, the Stevenson brothers recreate the looks of a person’s horse using the hair and shoes of the actual horse. Creating a rocking horse is a long process with a small horse taking 8 weeks and the larger ones taking up to 3 months. The company have been showcasing at Badminton for around 25 years, with their two dogs Digby and Florence accompanying them as part of their sales team. Beth then finishes by saying that being on a rocking horse is very therapeutic and takes her back to her childhood.

Josh’s first feature that he points out in his top three at Badminton Horse Trials 2017 was an interview with Alice Manner, a Telegraph fashion writer. She told Josh that she was looking to take pictures of people who were wearing things that were catching her eye. She said that she was particularly appealed with a woman from Kenya who made her own suede bags, wearing a pair of leopard print trainers. She also said that she was interested in snapping lots of pictures of dogs as she loves them. Alice calls a typical Badminton, country look as like finding a diamond in the rough saying that one could never go wrong with a tweed jacket. She also says that footwear is important when visiting an event like Badminton. Her perfect female outfit for an event like Badminton consists of a great jumper with a waistcoat and a pair of jeans. Alice also told Josh that spending the money on new attire is not a bad thing as buying clothing from an event gives you memories of that event. Her top picks for Badminton will be featured in the Sunday Telegraph.

The second feature that Josh picks is the interview with the dressage judge Anne Mette Binder discussing the changes to the course this year. She says that the need to test the cooperation and trust between the horse and rider is important, more so on a windy day as often experienced at the Badminton Horse Trials. Anne says that an arena like the one at Badminton is very demanding on the horses as they can often become tense before runs, making it hard for the riders. She tells Josh that she is impressed with how the riders deal with this. Speaking about the pressures that new riders feel at a four star event such as Badminton Horse Trials, she calls the event the crème de la crème for these riders as they finally get to experience an international arena like the one at Badminton.

Josh’s final feature he puts in his top three of this year is an interview with Horse Sport Ireland director Sally Corscadd. They begin by talking about rider Jonty Evans and how he has used his sport psychologist well to optimise his position on the scoreboard. He points out the three Irish riders in the top 25 riders, pointing out that it is encouraging for Irish eventing. Sally tells Josh that the Irish are building on their experiences from the Rio Olympics. Sally says that the Irish have a programme in place to put the young riders in a good position to build on these experiences. She also says that the goal is to qualify for the Tokyo Olympics and that they are in a good position to do show as displayed today.

To listen to all of our Badminton Features as well as interviews with the riders, please visit: https://www.badminton-horse.co.uk/audio-clips/