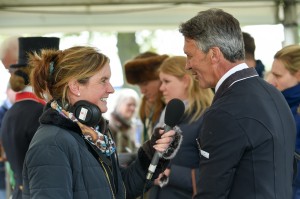 After breaking his neck at Gatcombe in 2015, Nicholson missed Badminton in 2016 and it was uncertain whether he would ride again.

The Kiwi star had previously won eight four-star events throughout the world but Badminton had famously escaped him, on several times by extremely narrow margins.

Nicholson, who holds the record for the most completions at the event (37), headed into the showjumping finale in third overall, needing mistakes from leading German pair Ingrid Klimke and Michael Jung to have a chance of winning.

After jumping clear on board Nereo he watched on as both Jung and Klimke knocked rails down to grant him the illusive trophy.

World Number One Michael Jung uncharacteristically had a showjumping rail down but was delighted to finish second after winning the four-star event in Kentucky the previous week.

Rosalind Canter was imperious throughout the competition to finish as the top Brit in fifth position, jumping clear on the final day to follow up a wonderful cross country ride.

To hear more rider reaction from the competition, please head to the official Badminton Soundcloud page.