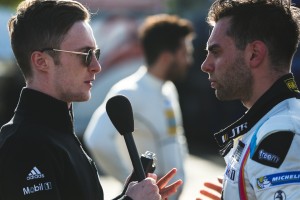 Two-time reigning champion Dan Cammish dominated at Oulton Park, leading both races from start to finish. Riding high from a brilliant debut in Porsche Supercup, Cammish returned to Carrera Cup in imperious form to take pole position in both races before converting them to his third and fourth wins of the season.

2016 runner up Dino Zamparelli was pleased with his improved pace at Oulton Park and after two second places, suggested there is definitely more to come from himself and the JTR Racing team this season.

A difficult qualifying session saw Lewis Plato begin race one from down in eighth on the grid before carving back to take third with a dramatic last lap manoeuvre. The JTR Racing driver again showed brilliant race craft in race two and was delighted to finish fourth overall.

Double winner Cammish headed into the weekend in supreme confidence after his impressive Porsche Supercup start. The Yorkshireman has called the opportunity to race as part of the Formula 1 package the opportunity of a lifetime and insists that his third and fourth place finishes are just the start.

For more interviews and reaction from the weekend, head to the Carrera Cup GB Soundcloud page by clicking here.