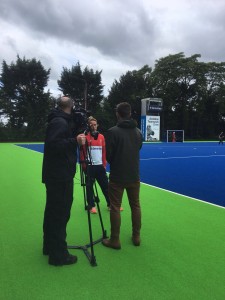 The England Women’s Hockey Team will play Argentina and the Netherlands this weekend (10th – 11th June) in the Investec Internationals series at Lee Valley Arena in the Olympic Park.

The matches will see the top three teams in the world facing off against each other, including Sunday’s sell out match with world number one the Netherlands, nearly a year since GB’s triumph over the team in Rio.

Gold medal winner Alex Danson is now one of the most experienced players in the squad and is excited to be part of a new, exciting England team that combines a host of Rio stars with a fresh wave of young talent. Danson is currently on 99 international goals heading into the weekend’s internationals:

Head Coach Danny Kerry has overseen Team GB for the last two Olympic cycles and is keen to begin this four-year Tokyo 2020 plan with a good set of performances against two top sides:

Goalkeeper Maddie Hinch is hoping to give her teammates insider information after just completing a first season in the Dutch Women’s Hockey league:

Despite still being young herself, University of Birmingham player Lily Owsley is another player will look to add her gold medal experience to the new squad: