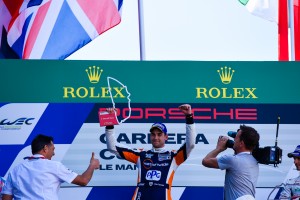 Cammish had qualified in fifth overall but battled back to lead the race from around the half way point. Unable to breakaway, he faced repeated challenges from Carrera Cup France’s Alessio Rovera including the Italian briefly taking the lead on the last lap only for Cammish and Zamparelli to pass him with just a few corners to go.

Delighted with the win, Cammish described the race as one of the best of his life.

Having narrowly missed out on pole position by just 0.016s, Dino Zamparelli led the race for several laps from the first corner. Dualling throughout with Cammish, Rovera and a host of other challengers, his last lap move to claim second position equalled his best result of the season.

Despite the great result, the 2016 Carrera Cup GB runner up lamented what could have been as he came so close to the win.

In championship terms, the result is Oliphant’s first podium of the season and he was delighted with the race craft he showed during the race.