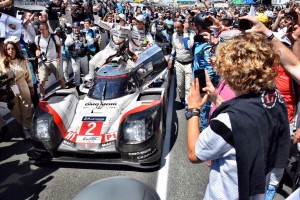 Timo Bernhard, Brendon Hartley and Earl Bamber sealed an historic hat-trick of victories for Porsche as they fought back in car #2 to win one of the most dramatic Le Mans 24 hour races in years.

After Toyota had smashed the previous lap record top qualify first and second in their leading cars, they looked destined to claim a maiden victory at Le Mans with both cars beginning the race in imperious form to comfortably lead for the first few hours.

For Porsche, car #2 experienced engine issues and were forced to pit for a lengthy period, seemingly halting any chances of the win or even a podium. Then disaster struck for Toyota as mechanical issues with all three of their LMP1 cars left only car #8 able to rejoin the race.

With more than three quarters of the race completed, Porsche’s car #1 led the race by 12 laps and seemed destined to cruise home. Devastatingly, Le Mans once again took no prisoners and the car was not able to continue after a mechanical problem.

Car #2 had a huge amount to do to even challenge the leading LMP2 cars. More than 18 laps down on the leaders, the fight back was remarkable from Bernhard, Hartley and Bamber to pass their rivals with less than an hour to go and seal the hat-trick of wins for Porsche.

Hartley was the only driver across the manufacturer’s two LMP1 teams not to have won the race and was delighted finally take the win.

Timo Bernhard had previously won the race for Audi but had not managed to repeat the feat for Porsche until this year.

Now a fully fledged member of the factory LMP1 team, Bamber first won the race in 2015 as a guest driver in a third Porsche car.