My first time at the biggest race in the world – Blog 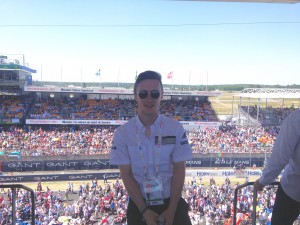 “It’s the biggest race in the world” they said. “You’ve never experienced anything like it” they insisted. “Yeah, sure” I thought.

I’ve been a motorsport fan in one way or the other for as long as I can remember. It started, as it does with plenty of British fans, because my parents were into Formula 1. I would watch race after race on Sunday afternoons as Michael Schumacher dominated in his glorious red Ferrari and my dad “rested his eyes” through the less exciting rounds.

Next came going to my first race tracks. Donington Park, Silverstone, Valencia, Estoril and Sachsenring followed as a fan with an exciting, intoxicating atmosphere at each one better than the last.

Now in covering the Porsche Carrera Cup I’ve visited the best circuits Britain has to offer and there’s a real vibrancy to the British Touring Car race weekends.

The most startling thing about the race is the sheer scale of the event. The entire city of Le Mans faces a week-long occupation by racing fans from around the globe and I would be surprised if there was a single can of beer left in the fridges of the supermarkets come Monday morning.

In sporting terms, every moment was a classic. The Carrera Cup proved to be one of the most exciting races I’ve ever seen and immediately I thought “wow, can this be topped if this was just the entree?”.

It was. Drama unfolded at every corner of the main event and witnessing the cars navigate the circuit at night time is genuinely magical and was a real moment for me. By the time the race had finished I had committed to returning one day as a spectator a thousand times over in my head.

To say that you’ve covered an event like Le Mans, to say you were one of the first to interview the winner after the race are just two more ticks in a week where my bucket list took a serious hammering.

I’ve not been to every race in the world but it really is hard to imagine one bigger than this.