It’s always exciting working with new clients. New clients mean new projects and new projects often mean new challenges. Hockey Wales came to Lloyd Bell for support during the lead up to the Women’s Euro Hockey Championships which will be taking place in Cardiff this August. The governing body have been given a huge opportunity in hosting the tournament and therefore wanted to ensure they were promoting it as much as possible, in order to capitalise on such an opportunity.

We began to brainstorm different ideas around how to best promote the tournament and eventually decided upon running a social media campaign of short films, each encapsulating a different aspect of Hockey Wales.

We worked with Hockey Wales to establish key dates that would enable us to film footage of the Welsh women’s team, but also other individuals who are key to the Hockey Wales family. As we all know in this industry, it’s not as simple as choosing a time and date and all parties being available – so three dates in the diary later, we were ready to rock!

We attended two international training sessions, a club tournament and an international match in order to capture the variety of footage required to portray the real Hockey Wales family. It was great to film with a fantastic group – the squad, the coaches, the volunteers, the background staff – everyone was so enthusiastic which made our job a lot easier!

After weeks of planning, filming and editing, the films turned out fantastic!

We created a total of nine films, which were themed:
– The Hockey Family
– Team Work
– The Coaches
– Volunteers
– Fans
– Playing for the Dragon
– Heroes on Home Soil
– I Love Hockey
– Trivia

The reaction to the films has been great since Hockey Wales have began publishing – which is something we are very proud of!

It was great to see a project through from start to finish, I thoroughly enjoyed working with the Hockey Wales team! 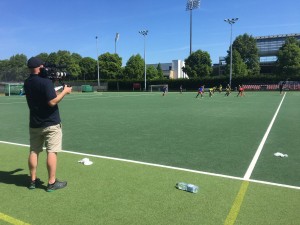