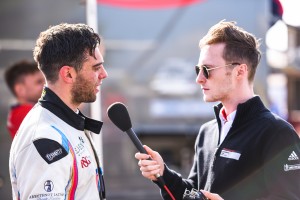 Catching up with Dino Zamparelli after his win

In the absence of double reigning champion Dan Cammish, title challengers Charlie Eastwood and Dino Zamparelli shared the spoils at Snetterton as each took a win and a second place.

Cammish’s absence, a forced one due to European Porsche Supercup commitments, left a perfect opportunity for the remaining contenders to seize the initiative in their championship battle.

A strong start for Eastwood in race one was enough to see him claim a flag-to-flag victory, despite consistent pressure from the chasing pack. Zamparelli cruised to second while his JTR teammate Lewis Plato took third.

Another strong start for Eastwood had looked to put the Redline driver on course for a second victory but immense pressure from Zamparelli in the second half of the race forced an uncharacteristic mistake from the leader. The JTR driver pounced immediately, going on to claim his maiden win of the season and reignite his title charge.

Cypriot driver Tio Ellinas has had mixed results in his debut Carrera Cup season after enduring torrid luck so far. Ellinas secured his first podium of the season in round two at Snetterton and hopes it can help springboard him to further success this season.

To catch up on all of the reaction from Snetterton, head to the Porsche Carrera Cup Soundcloud by clicking here.